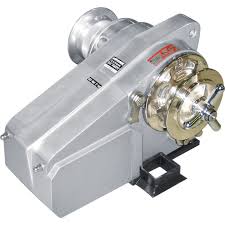 When I took the anchor and chain off for galvanizing I noticed that the anchor windlass would not power downward, but it would power upward.

Today I gathered some tools and went down to the boat to diagnose the issue.

First I verified that the symptoms remained the same. The up button worked, but the down button didn’t. There are four components to make the motor operate. They are the battery, switch, control relay, and of course the motor itself. The Lofrans motor has three wires. One is a ground and the other two are energized one at a time, for each direction.

By elimination, the fact that the motor ran in one direction proved that we had power at least. The down button, the control box, or the motor could be at fault, as well a connection along the way.

The Control box is a heavy duty relay which switches the battery power to the windlass. In the Hanse 371 it is located in the aft cabin under the bunk. All the connections were clean and sold. The two small red connectors are labeled B2 and B3 on the diagram. After a bit of thought, I turned off the master switch, and swapped the two wires. I put the power back on and tried the windlass buttons. The up button set the motor running in the down direction. The down button still did nothing.

This proved the motor and control box were OK. That was good news as they are expensive! That left the switch itself, and the connections. The switches were replaced last season and appear to be in good condition. I suspected a crimp connection. The Lewmar switches do not have terminals, just two wires exiting a sealed unit. The connections are in the anchor locker where things can be wet, so naturally it is the logical place for a failed connection. At this point the sky opened and I decided to leave the job for the next dry day.

Yesterday we had a rare dry day. I clipped the zip ties on the wiring harness in the anchor locker. I immediately saw a blue wire (B3 in the diagram) unconnected to anything. In a few seconds I found where it had been. The crimped butt connector looked fine but the wire broke right beside it.

A trip to the electrical tool box and I found a new blue butt connector, wire stripper and my Titan ratchet crimper. It was the work of a minute to cut off the old butt connector, strip the wires and install a new connector.

Why did the wire break?

I didn’t want to face the same problem again in a few months, so I looked closely at all the connections.

There are two things that can cause a copper wire to break.

The original connection was wrapped in electrical tape which appeared well sealed, but a look at the end that broke showed the telltale green of corroded copper. Proper marine wire is tinned, which greatly reduces corrosion. However, the foot switches despite being a brand name (Lewmar) use plain copper wire of fairly light gauge, #16 I am guessing.

To attempt to prevent this happening again, I wrapped the connection in self sealing rubber Rescue Tape. This is wonderful stuff and I always keep a couple of rolls on board. While I was at it I did the same with the 3 other similar connections. I tugged on each connect to be sure it was solid before taping it up.

I found one more issue which I will cover in another blog post.

1 thought on “Troubleshooting the Windlass”