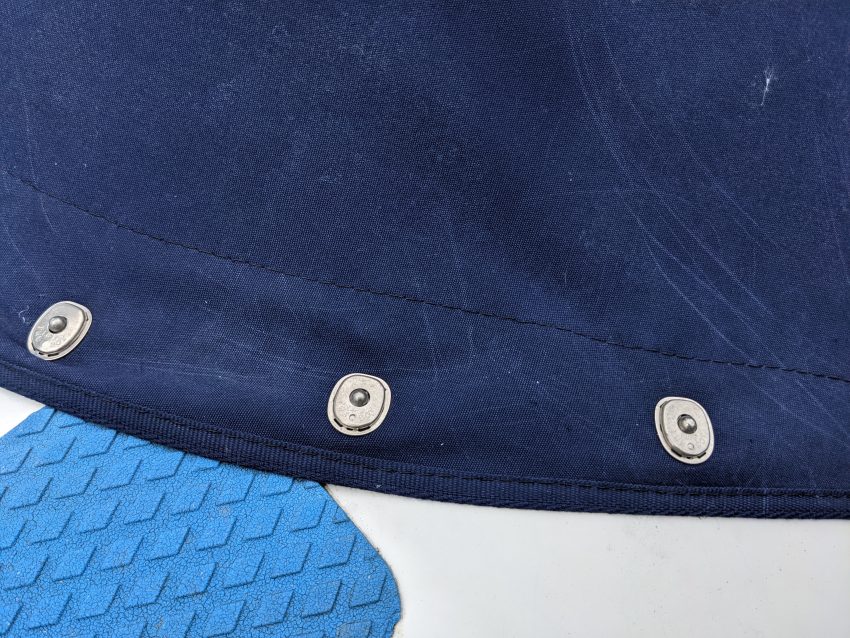 There are two common fasteners used on boat canvas. The most popular is the snap fastener which can be canvas-to-canvas or canvas to a hard surface using a stud. This is a non-directional fastener, and usage is obvious. However, its holding power is limited. If a snap isn’t adequate, often a lift-at-the-dot fastener is used.

Lift-at-the-dots are strong in sheer, but sometimes get damaged when lifted on the wrong side. The front edge of my dodger canvas (shown) uses these, and they have performed well. However, on the inside of the dodger were two more lift-at-the-dot fasteners which were loaded straight up. Both failed within a year, and would no longer hold at all. They aren’t well designed for that type of load.

Rather than just replace the lift-at-dots, I cast around for something better. In this case, “better” is the Loxx™ fastener from Europe. It is as strong as the lift-at-the-dot in sheer, but much stronger on a straight pull. They are easier to install and replace, since the two parts thread together. The male part, or stud, is similar but not the same as the lift-at-the-dot stud, so that must be changed too. It took only a few minutes to make the change. The hardest part was removing the lift-at-the-dot fasteners from the canvas, which required unbending tiny metal tabs. The Loxx fasteners fitted in the same holes, so installation was a breeze. To use you just push them onto the stud, to remove, pull the small knob. Definitely more intuitive than you-know-what!

Loxx fasteners are available in a wide variety of finishes and several types including canvas to canvas. Just Google Loxx fasteners and you will find suppliers for small and large quantities. Highly recommended.

Loxx deserves to be better known in North America. They certainly solved my small problem.