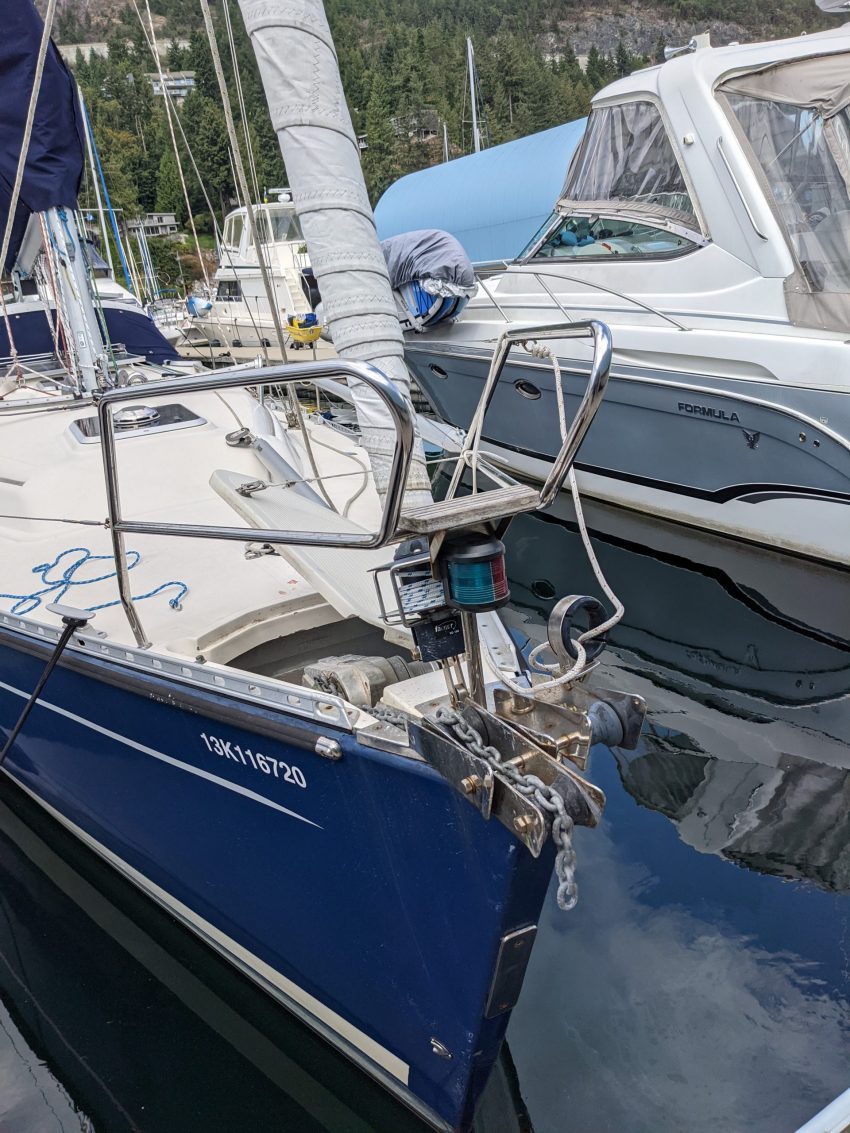 A little background first. A couple of years ago I had my anchor and chain re-galvanized. This was a great success, and both looked like new. However, after I started using it, I noticed the chain would jump on the gypsy sometimes, particularly when I let out a lot of chain. The chain moves fast when powering up or down and it wasn’t obvious what was happening. At first I thought it had to do with the new galvanizing, but the chain fit the gypsy perfectly.

I tried operating the windlass manually, a slow process but it let be see what the issue was. The chain was twisting as it entered the gypsy. When the twist became too great, the chain would jump out of the gypsy and slip a few links before re-aligning itself and gripping. This had the effect of moving the twist to the outboard or anchor side. If the anchor was off the bottom of course it and the chain would rotate to the new alignment. But is the anchor and some chain was on the bottom that couldn’t happen.

I thought of fitting an anchor swivel, but I quickly realized that it wouldn’t help. The friction of the chain on the bottom would prevent it from untwisting.

An internet search suggested that some people with this issue regularly unload the chain on the dock , straighten it, and put it back in the locker. I removed the anchor and tried this. I spent a couple of hours working at it, but once I had the chain laid on the dock untwisting it was heavy slow work. Operating the windlass required going aboard the boat, then jumping off every so often to re-arrange the chain. I eventually gave up. I used the windlass to drag the chain back aboard. It jumped a few times, indicating the twists were still there.

I decided to take the boat out into deep water, drop all the chain straight down, and let it straighten itself out. If you live where water is shallow, this might not work. Here in BC deep water is almost always close by. A few hundred yards off the marina entrance the water was 250 feet deep. I have 50 meters of chain, about 160 feet, so that was deep enough. I should have picked a calm day, but it was blowing about 15 knots. It was calm in my marina slip and I didn’t check the marine observations. I went ahead anyway.

I stopped the engine, and let the boat drift beam on to the seas. Then I dropped the chain. I had to help the first few meters out by hand, since at first there wasn’t enough weight out to pull it down smoothly. IT IS IMPORTANT THAT THE BITTER END OF THE CHAIN BE WELL SECURED WITH A ROPE TO A STRONG POINT. Once the chain started rolling out it went faster and faster as more weight fell on the windlass. The chain jumped many times, and eventually kept going even when I stopped the windlass motor. It finally stopped when a knot of chain near the end jammed.

I tried to pull in some slack so I could unknot it. The windlass was jammed too, and the chain hanging straight down weighed about 180 lb. I couldn’t move it by hand. I used my chain hook (pictured) to hold the chain while I got a spinnaker sheet. Tied to the chain and led back to the starboard sheet winch, I was able to crank in a enough chain to start clearing the knot. I untied the rope attaching the end of the chain, which made me nervous, but it too was badly twisted. Then I set about untangling the knot by rotating the chain from the end. Some blood (mine) was spilled and a couple of fingernails broken but I succeeded.

When I looked up I noticed the boat had drifted quite a bit closer to shore, but the depth sounder still read over 180 feet. I figure pulling up the chain would be fast. First, I had to reconnect the bitter end, then pull in enough chain with the sheet winch to allow me to drop the chain over the gypsy with enough extra to apply some tension. Once that was done I started pulling in the chain. Although the windlass is rated for 1000 lb. pull, at first it labored to pull up the heavy weight. As more came in the load got lighter and by the end it seem to be almost flying in. It never jumped once, so it appears the untwisting was a success.

When I looked up, we were getting uncomfortably close to the rocky shore, although still in 140 feet of water.

I motored back to the marina, tied up and took the photos attached. It will be interesting to see if it re-twists itself.

Lessons learned:
It would be better to have a friend aboard to help and keep a lookout.
Wear work gloves when un-knotting chain.

Why was the anchor chain twisted?

My feeling is I put in the locker twisted. I loaded it directly from a wheelbarrow, and didn’t pay any attention to how it came aboard. I don’t remember it jumping on the gypsy, but my gut feeling is that it did. I’ll update this post after a use the anchor a few times.