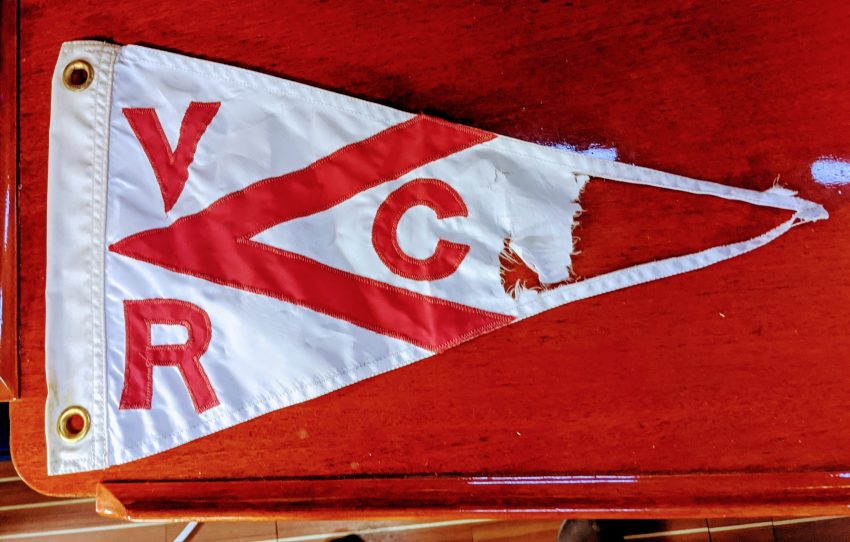 This is what happens to a burgee when you leave it up all the time. This one is slightly less than one year old, but has been up in the sun and wind almost the whole time. The sun’s UV light weakens the fabric, and the wind goes to work,

Most yacht clubs ask that you fly your burgee when visiting another club, or tying up at an outstation. There is no need to fly it in your home marina. But it is easy to forget, and taking it off the halyard and stowing it takes some effort.

If you don’t have this problem, you can stop reading now and go watch TV.

For the rest, who are perhaps as lazy as me, I have a solution. Let me first say that lazy people are responsible for almost all of life’s labor-saving inventions. Energetic people usually do things the hard way. We lazy folk think “There has to be an easier way!” and we are often willing to expend plenty of energy to figure out the easy way.

So my idea was a simple (and cheap one. Materials were one 30 inch length of 2″ PVC pipe and two zip ties. An 8′ length of pipe cost 8 bucks at the local hardware. They cut it for me free, and the rest is in may garage now awaiting another brilliant idea. The zip ties came from my toolbox.

I used a blade to clean up the end that was cut rather roughly. Then I drilled two pairs of hole in the tube, near each end and about one inch apart. There was a printed stripe on the side of the tube which served to help me line up the holes so they were about in the same place on both ends. I did this by eye because it isn’t critical.

Using the zip ties I fastened the tube to the standing rigging nearest the flag halyard, allowing the lower end to rest on the top of a turnbuckle. Then I untied the ends of the halyard, and ran the part that holds the flag through the pipe. Above is a burgee (from the estimable Sea Sloth Yacht Club. Below is the same flag rolled up and partly inserted in the tube.

Next, the flag completely stowed. I made the tube long enough to take two flags because I belong to two clubs and sometimes fly them both at once.

Please help support this site buy purchasing one of my books or Audiobooks HERE.