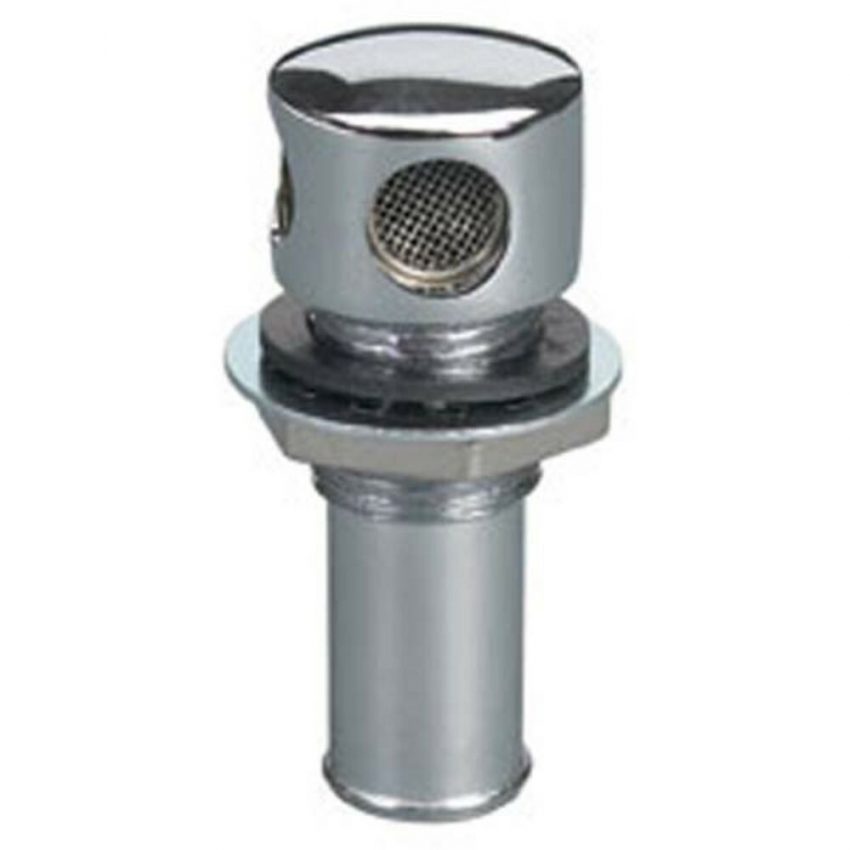 The least favorite part of my boat for maintenance is anything to do with the toilet and holding tank system. My Hanse 371 is now 20 years old, so of course many things have been done to that system.

I used to rebuilt the Jabsco twist-n-lock toilet pump annually with a repair kit. It is a messy but not difficult job. However, now I just replace the whole pump. The cost is about $140 CDN versus about $85 CDN for the repair kit. It’s worth it for the time saving. I carry a spare pump on board.

The original through hull fittings were made of DZR Brass, not bronze. This materail is CE approved, but I personally wouldn’t use it on a boat. I thought they were bronze at first, but I began to see reports of failures on some European boats newer than min. Last season I replaced the through hull fittings and ball valves with New Zealand made Trudesign fittings. They are made of high quality reinforced plastic and will probably out last the boat. Highly recommended.

Late in 2020, I my (more sensitive) wife noticed a strong sewage smell in the head. She also reported that sometimes water bubbled in the toilet. When pumping out the holding tank with the electric pump (not the deck fitting) it seem slow, and air could be heard sucking through the toilet. These are symptoms of a blocked holding tank vent.

Since it was winter, and we were not sailing much, I put off the fix for a while. Yesterday I decided to tackle it.

The vent exits just below the toerail with a fitting like this:

The screen is for flame retardancy on a fuel tak, and was not present on mine. The screens are easily pugged with dirt or insect nests, so it is good to remove them from water and holding tank vents.

I tried poking a wire through the fitting from the outside, but it seemed clear. This was a vain attempt to avoid taking things apart. I don’t know why I bothered.

Next, working inside the head locker, I removed all the cans and bottles blocking access to the area, then loosened the hose clamp and pulled the hose off the vent fitting. I briefly switched on the pump, listening at the hose. No air was moving, confirming that the vent was plugged somewhere closer to the tank.

I poked a stiff wire down the hose, but it met resistance, and moving it back and forth did no good. Then I went to the other end of the system, under the sink. With a powerful flashlight I traced the hose back to the tank. I found there was a filter in the line: 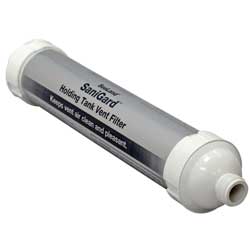 This was what my wire had hit, but it wasn’t the source of the blockage.

The holding tank is stainless steel, not typically a recommended material for such use, but the walls are thick and it seems to be in perfect condition after 20 years. The vent hose was attached to a standpipe about 2 inches long. I loosened the clamp and pulled the hose off, with some difficulty.

The I ran the pump for a few seconds. Even with the hose off, the vent was still blocked. I used a mirror to look at the standpipe. It was completely blocked with something black and crystalline. I used a large Allen key to poke it out. It seemed to be salt crystals, and surprisingly had very little smell. A quick test of the pump confirmed the problem was solved.

Lesson learned? Next time start at the tank. After reconnecting the hoses and testing the system, all was well.

I am not sure if this could be prevented. In any case, since it took 20 years to become a problem, and I’m 73, odds of it happening again in my lifetime seem slim!

Please help support this site buy purchasing one of my books or Audiobooks HERE.