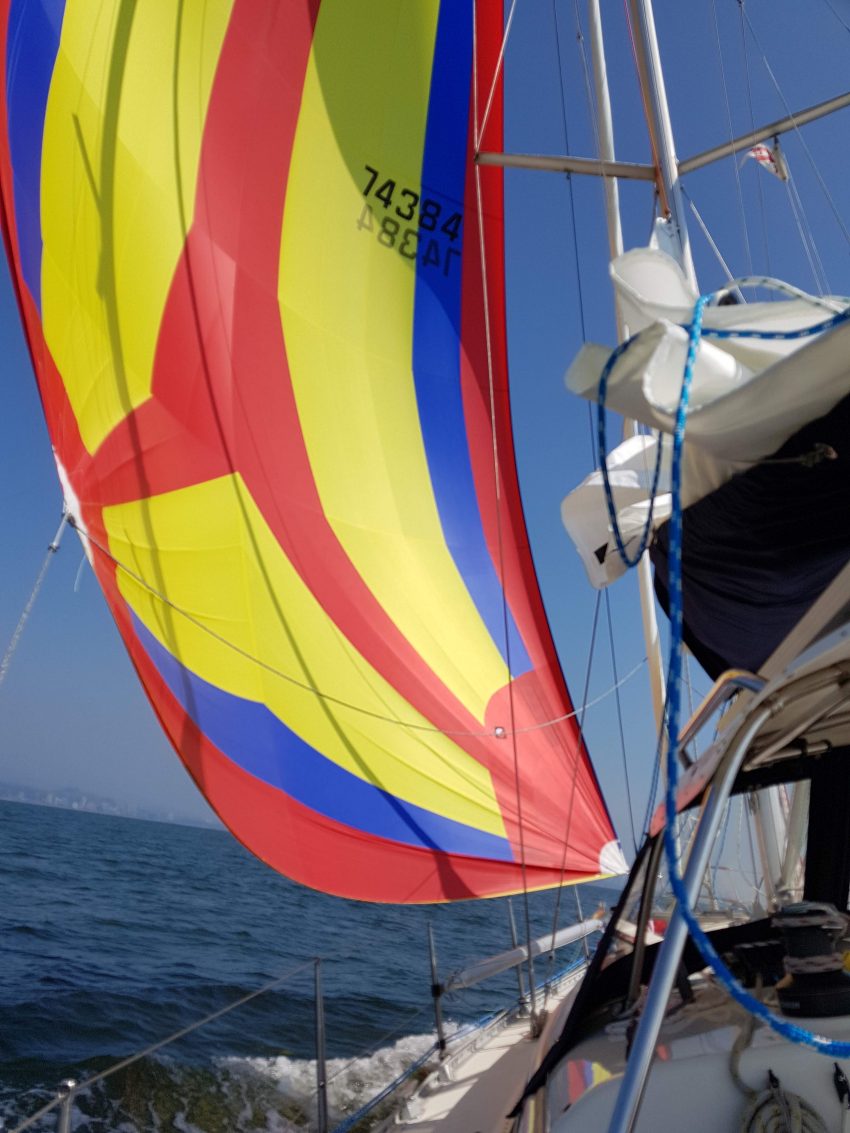 After several adventures flying the symmetric spinnaker single handed, I made the decision to install a furler on a retractable sprit. I ordered a Selden 75mm sprit and a Harken Reflex 2 furler.  I used the Selden 90 degree bracket and fastened it to the port side of the double anchor roller, opposite the Rocna anchor.  I had to drill four 3/8″(10mm) holes. I used a 1/8″ bit followed by 1/4 and then 3/8. I used one fresh 1/8″ titanium bit for each hole. Use a center punch, the bits tend to wander on the hard stainless.
The sprit projects 700mm beyond the bracket, and the base is just aft of the anchor locker when extended. The sprit was overlong, and I had it shortened 480mm by the local repair shop at low cost. I will have to remove it to anchor.

A photo of the (17 year old) symmetric spinnaker on the new Harken furler. The rigger said it wouldn’t work. The sailmaker said it might. It works quite well. Photo taken by Pierre Cote on Delicate Balance. The new Asymm has arrived and we will try it out within the next few days. It is about 10% bigger than this one.

Today we had 8-10 knots of wind and tried the spinnaker out properly. We could easily reach up to 60 degrees off the apparent wind, and probably higher if need be. Speeds were in the 6.5 to 7 knot range topping out about 7.5. I started out with the main up but found I had trouble seeing the spinny so dropped it. Didn’t see much speed difference. Dead downwind speed dropped to 5.6 knots, still pretty good. I would say it is at least a bit faster in this wind than the old symmetric. A much better shape for reaching.
Then we furled it which went smoothly. The Harken reflex is a first class piece of gear. Left it up and sailed back a few miles to windward. If it interfered with flow over the jib it wasn’t obvious.