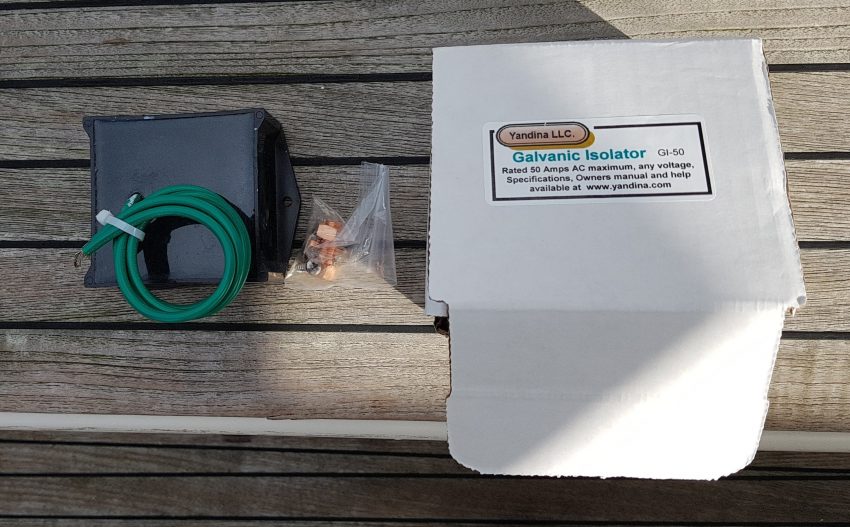 There is no other metal, the through hulls which were originally DZR Brass, have been replaced with Trudesign non-metallic fittings.

There is a large circular zinc on the sail-drive, which typically lasts for several years, The propeller has its own zincs, three small ones at the base. These last only about six months, I typically replace them mid season by diving.

The metal parts are not bonded together, or grounded to the engine. The manufacturer specifically warns against bonding, and does not fit a zinc to the rudder, which is well separated from the other metal parts. Still I have always been a bit nervous about this. A few years ago, when the boat was already 14 years old with no previous signs of electrolysis, some small pits began to appear on the rudder post. This was stopped using an external zinc which I drop in the water when moored. It is connected by a wire to the rudder post. At the time the boat was moored in a slightly scruffy marina, so the problem was likely stray currents in the water.

The problem of faulty wiring in a marina, or on another nearby vessel cand be serious and lead to rapid electrolysis. There are two possible solutions. One is an isolation transformer. This complete prevents leakage between the shore power connection and your boat. It also is heavy and expensive. It could be useful if you travel to areas where the shore power is a different voltage from your home port. Here in North America we have 110 Volt, 60Hz power. In Europe and many other locations power is 220 Volts 50Hz. There are transformers available that can isolate while keeping voltage the same. This is a big can of worms, which I didn’t want to get into, since I plan to stay in the 100 Volt zone!

I decided to fit a Galvanic Isolator. This isolates the vessel ground from shore for small voltages that could cause galvanic corrosion, while still passing larger voltages, such as might be caused by a short circuit,

After reading this article, I ordered a Yandina Galvanic Isolator rated at 50 Amps. My shore power connection is 30 Amp so that should be a good margin of safety. Whatever galvanic isolator you buy should meet ABYC “failsafe” requirements. The Yandina does, is waterproof, and was reasonably priced.

Installation instructions are simple and clear, specifying that one green wire be attached directly to the shore power connector ground, and use the included split bolt connector on the other side.

I saw two problems with this. One is that my shore power inlet is in a cockpit locker where addition wiring could be vulnerable to damage. Secondly the protective cover of the inlet was well sealed with Sikaflex. From previous experience I knew that removing it was likely to cause damage to the plastic part.

I traced the wiring, and found that the Green/Yellow ground wire went directly to the Ground Buss on the AC panel, which on my boat is completely separate from the DC panel. So I decided to mount the Yandina beside the power panel, in series with the ground wire. This was much easier, and it is in a more protected spot. The electricity doesn’t care which end of the wire the isolator is on!

I Crimped a Lug on one wire and connected it where the ground wire from the power cable had been. I cut the original lug off the end of the power ground used the included connector.The instructions state there is no need to insulate the connector, but I wrapped it in tape anyway. A couple of zip ties and all down. It took longer to write this than to install it.

Of course, only time will tell whether the galvanic isolator makes a difference, but I’ll sleep better knowing it is there.