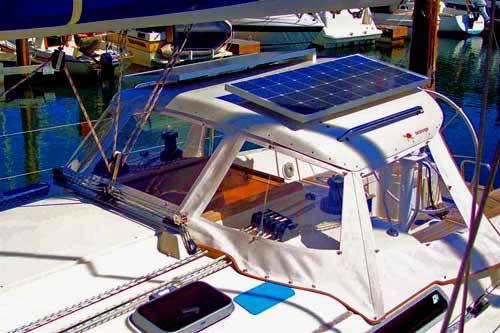 In 2004 I had a Tartarooga Hard Dodger Installed on Tangleberry. I took the opportunity to install two solar panels on top. They were 75 watts each, and were quite expensive, I believe about $1000 for the pair. The controller was a simple PWM type. They worked well and would keep up with the fridge in sunny weather.

Flash forward to 2020. I am planning a cruise to Mexico and possibly on to the South Pacific, leaving the PNW in September. I am reviewing all the equipment on board with an eye toward self-sufficiency and low fuel use. In Mexico we will likely spend long periods at anchor and I would rather not run the Volvo.

Reviewing Solar panels I found that I could get 100W panels which were just slightly smaller than my 75 watt panels, and much cheaper. I bought two Renogy 100W compact panels for just $110 CDN each. They were easy to mount on the same brackets as the originals.

Since it is winter here, the days are short and cloudy, I didn’t really expect anything from the new panels. However, even on a cloudy winter day they were putting out about 2 amps. That is not enough to do much more than keep the batteries up with the fridge off, but it is still something.

I also wanted to be able to run the Raymarine Autopilot at sea. I calculated that the fridge and pilot together require about 6 amp hours x 24 hours and adding another amp for lights, and we are at a dailiy requirement of 168 amp hours. My 200 Watt PV array with 5 hours of sunshine would produce about 75 amp hours, less than half of what is needed. I started looking for a place to add more panels.

A stern arch is the ideal place for PV panels, but I don’t have one and thaye are expensive and not pleasing to my eye.

Looking for a place on deck for more panels the obvious location was on the hatch garage ahead of the dodger (Spray hood for Brits). It has a smooth surface, and is under the boom where nobody walks. Of course, under the boom is not the perfect place for sun exposure, but when sailing the boom will be to one side, and we can also pull it over at anchor.

Two more of the Renogy panels would *almost* fit but would be a little too close to the traveller. Te ideal shape would be square, and I found a 150 watt Dokio Solar panel which was square and just the right size. I ordered one and am awaiting delivery. I’ll report more and post photos when it is installed,

Obviously we still won’t have enough power at sea, but I have a solution for that. My friend Pierre has an Aquair Towed generator. We used it only once but it did generate a worthwhile amount of power. I will bring that along, with a plan to use it only if the batteries drop below 50% capacity.