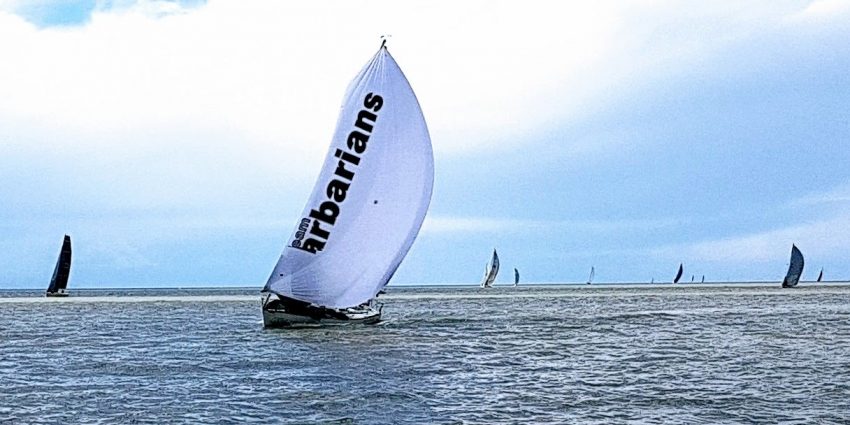 The course was around Popham and Little Popham Islands, leaving both to port, and returning to the starting point. Total distance was about 21 nautical miles.

The longer version of this race normally gets about 20 boats entered. Three factors led to a much greater turnout this year, 52 boats. Factor 1, the Covid pandemic caused virtually all the other races this spring and summer to be cancelled. Factor 2, the shorter course might have made the race more attractive, requiring less of a time commitment. And Factor 3, a Double Handed division was added.

The start was arranged in pursuit style, with the slowest rated boats starting first and proceeding to the fastest, based on PHRF rating allowance over 21 miles. This meant that the order of finish determined the final placement. Results were posted quickly since further calculation was not needed.

The forecast was not favorable, with rain and light winds of 5 knots or less. Fortunately the forecast was wrong, and the start saw rain, and winds of 12 to 15 knots from the south east. It was a spinnaker start, with the first boat, PHRF 244, crossing the line at 9:30 AM. My boat Tangleberry, rating 128, started at 10:10 AM, the 19th start. The fastest boat, catamaran Cheekee Monkee, rating -21, started about 40 minutes after me.

One new rule was added to the sailing instructions. Social distancing, boats were not to approach within 6 feet of each other!

I started on time, crossing the line within a few seconds of the allotted time. I crossed under mainsail alone, then unfurled the spinnaker. That didn’t go well. It rolled out about 2/3 of the way, then refused to go further. I spent 20 minutes messing with it while boat after boat passed me and the autopilot steered. Finally I stuffed the whole mess down the forward hatch and set the genoa. As a result the downwind leg was slow and there were many boats ahead by the time I rounded Popham. I was greeted with sunshine and a decent breeze. Tangleberry goes upwind very well. I took one long tack away from shore on port, the flipped over to starboard, and held that tack all the way to the finish.

On the windward leg I passed a lot of boats, hitting steeds up to 7.6 knots. A few got by me near the finish as the wind dropped. Tangleberry goes best in 10 knots or more.

At the finish, I looked behind me, and counted 15+ boats, so I knew I wasn’t last. It turned out I finished 19th, and there were 32 boats behind me. I was 3rd in my division. The slowest boat in the division, a C&C 32 called Covivant, won it. He also finished first in the Single-Handed division. First overall, double-handed, was Longboard, a Riptide 35, the fastest rated monohull.