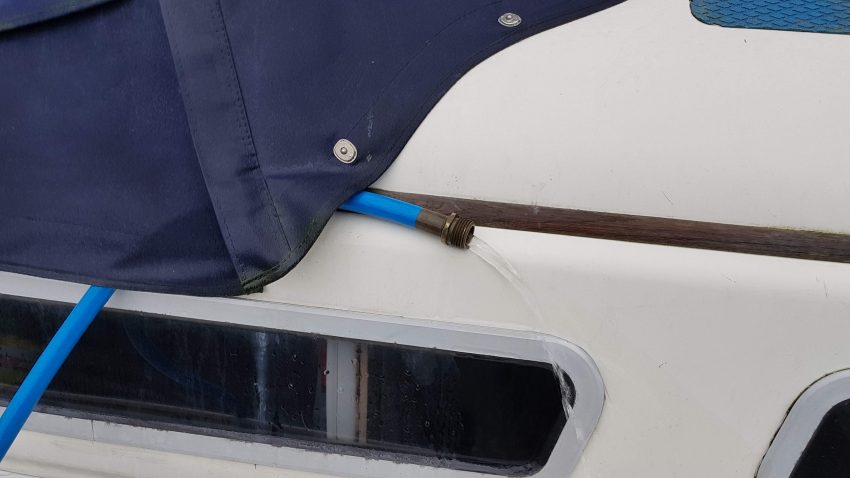 Almost every boat will eventually develop leaking windows. My boat Tangleberry is no exception.

The first leak started about 5 years ago. It was one of the large aluminum framed windows on the port side above the aft sleeping cabin. From past experience I know that trying to fix this sort of leak without removing the window is futile. Unfortunately I damaged the window in the process of removing it. It was stuck in with very tenacious Sikaflex, and I was a bit over-zealous in removing it.

The result was that I had to replace the window. Not only that, but the corner radius on the original was tighter (about 50mm or 2″) than any local supplier could duplicate. The new window would be slightly longer and would require some cutting of the deck house to accommodate the larger radius. I replaced both windows on the port side so they would match. I ordered new windows from AJR windows, providing the old ones as templates. They did a great job, but it took about 6 weeks for delivery. While waiting I taped plastic sheeting over the holes with duct tape.

The new windows required cutting the holes slightly large at the ends and I used a roto-zip cutter, which worked OK. I bedded them with Butyl Tape, which is non-hardening, so next time they will come out more easily.

Recently I began finding small amounts of water of the galley counter (starboard side) where the windows were untouched since new in 2001. I had just installed a solar panel, and the wet area was right under the place in the headliner where the wires came through. I took the panel off and resealed everything, but honestly saw nothing wrong with the job I had done. After a few days it rained again, and I found water in the same location. The only other possible source was the window, but it wasn’t wet around the frame. I rigged up a hose to pour water on the end of the frame where I suspected the leak. After about five minutes a drip appeared.

I didn’t want to replace the windows this time, so I was more careful removing them. Using a putty knife, razor blades and a chisel (needed to lever the frame up enough to get the putty knife in) I managed to cut the Sikaflex bit by bit, starting at the end where the leak was, as the bonding there had failed, making it easier to loosen. It took more than an hour to get the window frame out, but It was undamaged.

I still had the problem of removing the old Sikaflex from the cabin side and the aluminum window frame. The cabin part wasn’t too bad. A 3M pad, and some acetone cleaned it off quickly. It was very tenaciously bonded to the window frame, and I used a Stanley knife to cut it off as closely as possible. A visit to the local marine hardware produced this stuff:

This product is no miracle, but it did soften the Sika enough so that I could clean it off with the brass wire brush, followed by a cloth. Another hour of work and it was all clean.

The glass was surrounded by a rubber extrusion which was in good condition. I removed it and cleaned the glass with alcohol. Then I cleaned the rubber with a wet cloth, dried it off, and rubbed silicone grease into the groove where the glass sits. This is the stuff that divers use to get a seal with their masks. It is water resistant, and although called grease, it is also a good sealant. Then I replaced the rubber on the glass, and inserted the glass into the frame where it was loosely held in place by stainless steel clips. The final clamping of the glass takes place when the inner frame is screwed in place.

Reinstalling the window appeared successful, but it leaked worse than before. The factory windows are of poor design. The frame overlaps the opening by only 6mm (1/4″) and the hole was a bit sloppy so in some places there was less than 1/8″ of flange. I decided to order a new window from AJR. Their windows are of superior design and have a 3/4″ flange! The forward window is not leaking so I am leaving it for another time. I can live with mismatched windows for a while.

The new window will take about 6 weeks for delivery, and I wanted to be able to use the boat while waiting. A trip to the local lumberyard yielded a 48″ x 18″ sheet of 1/4″ Coroplast (corrugated plastic) for $8. I traced to outline of the original window on the Coroplast with a felt pen and added about 1/4″ all round. Then I cut it with kitchen shears and a Stanley knife.

To fasten the Coroplast over the window opening I used Duct tape. I know I will have to clean the glue off later. I recommend the cheapest duct tape. Gorrilla tape or one of the other heavy duty brands is likely to be more difficult to remove later. I used a couple of short pieces on the top to hold it in place then began taping from the bottom. This way as you move up the higher tape overlaps the lower so water can run off. I tried to do a neat job because it will be there for a while!

The new window from AJR was ready om March 21. That was a week before schedule! A great company to deal with. Since it had not been on too long the duct tape came off easily with minimal cleanup. A bit of Goo Gone and a paper towel did the trick. The new window has larger radius corners, so the hole had to be cut a bit longer on the ends to match up. I made a pattern of the new window using Coroplast then used a felt pen to mark what had to be cut. The guy who works on maintenance sometimes owed me a favor, so he did the cutting for me using a Roto-Zip.

The new window came with a roll of Butyl Tape and a tube of black silicone. I used the Butyl but not the silicone. I stuck the Butyl to the inside of the flange and did a test fit before removing the protective paper. There were a couple of spots on the ends where the Butyl tape thinned out as it bent around the corners. I took off the paper, added a second layer, and place the window in the opening. Then I looked from inside. It was resting on the bottom, with a bit more gap on top. I shimmed it with a piece of scrap linoleum to center it in the opening. Then I put the inner frame in place and screwed it down lightly. The side of the cabin has a slight curve but the window took the bend easily. The next day was warm and sunny and I tightened the screws hard. This caused some Butyle tape to squeeze out, particularly where I doubled it up. I used a Stanley knife to trim it and Goo Gone to clean up.

If you look closely at the photo you will see that the new window looks a bit different from the old one. It doesn’t bother me, and I am sure most people won’t notice. When the forward window eventually leaks I’ll replace it and they will match. BTW a heavy rain has shown no leakage.