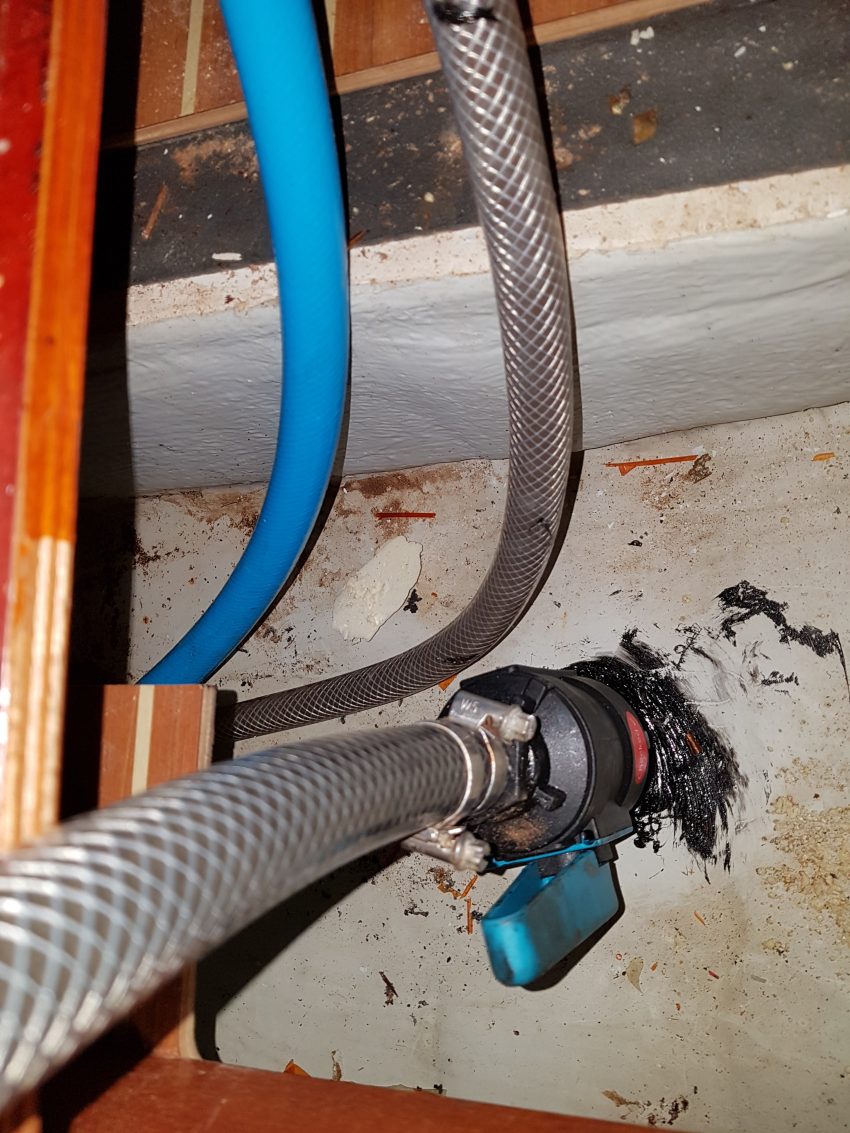 If ever there was a boat that “could” have a dry bilge it is my 2001 Hanse 371 sailboat Tangleberry. The engine is a Volvo saildrive which does not drip like a stuffing box. There are only 3 underwater through hulls. The hull and deck joint is solid, and the hull is overbuilt, with plenty of solid fiberglass below the water line.

Early in my ownership there always seemed to be some freshwater in the forward bilges, which I put down to a rain leak of unknown source. But then the water level increased in a dry spell. The only thing I had done was fill the water tank! A close inpection showed the top of the tank was wet around the cleanout opening. I removed the hatch and found that there was no sealant at all under the rim. After sealing with silicone sealant that leak was gone.

For the next five years or more of her life, the bilge was indeed virtually completely dry. The automatic bilge pump never ran. Then one day that all changed. I went on board for a general check. The freshwater pump was hammering away. We usually shut it off when leaving, but must have forgotten. The bilge had about 2 inches of freshwater and the water tank was empty. Two inches was the point at which the automatic pump switched on.

Once I cleared the bilge with a hand pump followed by bucket and sponge, I refilled the water tank and switched on the pump. Water was coming in from aft, and I opened the floorboards and bunk top in the aft cabin. The water was pouring out of the bottom of the hot water heater. All the connections were sound, the inner tank of the heater had ruptured, probably through corrosion.

The culprit was white enamel finished, cylindrical in shape, made by Isotemp. The inner tank was NOT stainless but plain steel, and it rusted out. Apparently these tanks were made specifically for yacht builders (cheap) because all the Isotemp tanks I could find for sale were Stainless Steel. I replaced it with this:

This has solved the water heater problem, and since the inner tank is stainless I don’t expect any further problems. In any case it is now 14 years old and works as new. It did once stop heating water on AC power. That is when I discovered a circuit breaker hidden under that rectangular cover. I wish they made it visible. I reset it and have never had another problem. The pressure relief valve sometimes dribbles a bit of water. I put the hose into a one liter water bottle which I check once in a while.

So the bilge was dry again for quite a few seasons. Then a drip from a window caused the replacement of the two large windows on the port side. I couldn’t get exact replacements, and as it happens they were not a good design. AJR Marine Windows made the new ones which are far superior. Again a period of dry bilges ensued.

Last year I found the bilge 2 inches deep with SALT water. That really scared me. Fresh water is unlikely to sink a boat, but if the ocean is coming in…watch out! In this case water only came in when the engine was running and it was soon traced to a loose hose clamp on the heat exchanger.

This time I really wanted to empty and dry the bilge thoroughly. I bought an inexpensive wet/dry shop vacuum.

This can suck up water rapidly, right to the last drop on a flat bottom. It works well, but does require frequent emptying as it holds only about a gallon. I just dump it out the companionway. Of course it is 110 Volts AC, but will run on the 2 KW inverter if needed at sea. A friend of mine has a larger shop vac permanently installed with a long hose, and an automatic bilge pump in the bottom of the tank. This works well but I can’t spare the room.

The Hanse has large U-shaped hull stiffeners in the bottom. They do have limber holes, but still trap some water. The vacuum hose is too big to fit through the limber holes. The shower drain has a diaphragm type pump which can run dry. I found a piece of plastic tubing which fits into the drain. By switching on the shower pump you have a very effective bilge pump that can fit into tight places. Since it can be used continuously it could actually replace the shop vac. It is slower but does not need emptying!

In the interests of my readers I tried another type of pump, a drill powered self-priming pump. This was cheap, only $20. It tried it at home with a high speed drill, and it seemed to work OK. But on the boat, with my smaller 400 RPM cordless drill it would not prime. Useless.

More recently I have had two more leaks, one from a missing washer on the sink drain (no idea where it went or when it disappeared) and another from a loose clamp on the hot water line in the head.

The bilge is dry again now, but for how long? UPDATE: still dry after 10 days or so. Planning a sailing trip next week so that will tell the tale.