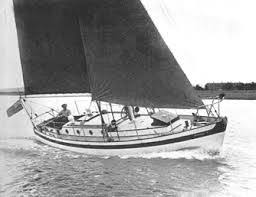 The Hiscocks were a British couple who circumnavigated the world in the 1950s and 1960s. It was their book Around the World in Wanderer III, loaned to me by a friend when I was 19, that got me interested in sailing, cruising and living aboard.

It could be said that Eric Hiscock taught me how to sail. Before I ever set foot on a cruising sailboat I bought a copy of Cruising Under Sail, which was the best sailing how to book at the time. It is now rather old fashioned, but it is still good reading.

I bought a 35 foot Piver designed trimaran called Moonraker, and moved aboard with my young wife. It was a great life in the early 70s, and we met many interesting and sometimes strange people. 10 boats later, we are still out there sailing cruising and generally having fun on the water.