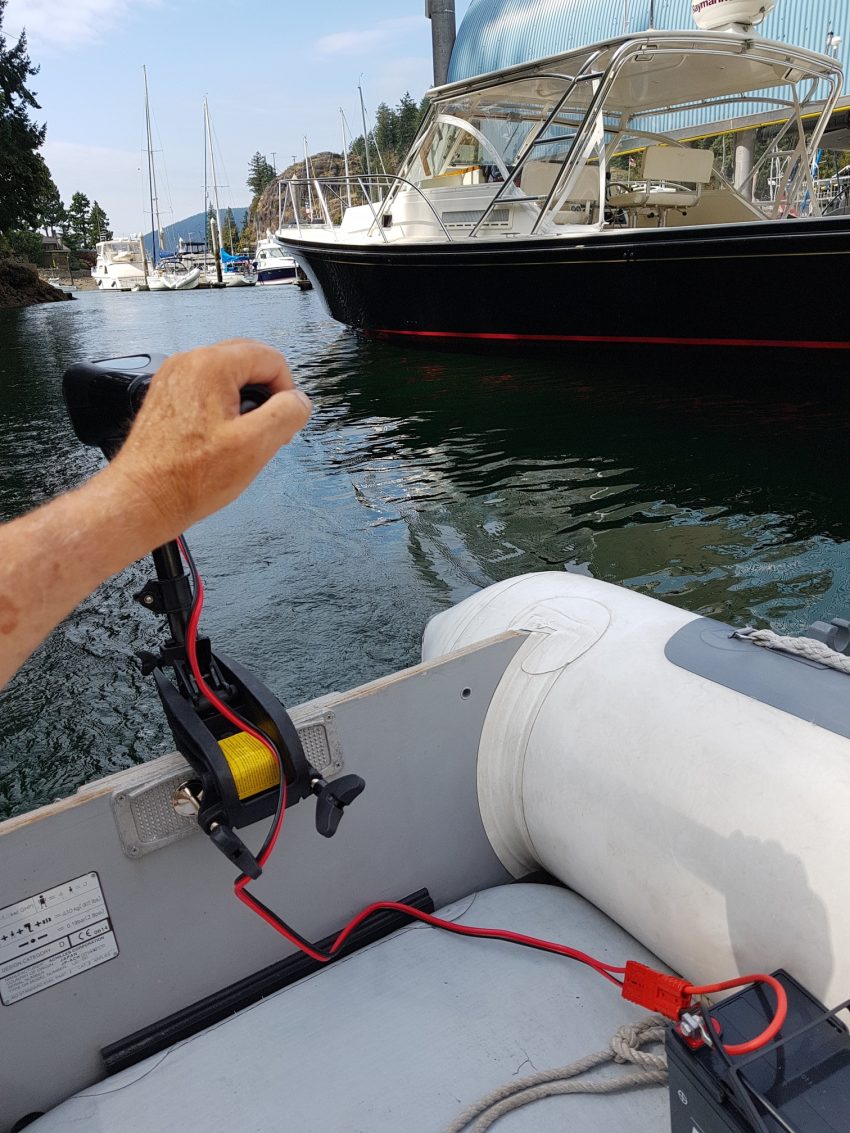 After selling the Honda outboard, I needed to set up a suitable electric alternative. I considered the Torqeedo and Minn-Kota outboards. These both seem to be worthy substitutes for traditional gas/petrol outboards, but were much more expensive than a gas outboard.

My usage is different from some. I don’t care about going fast, since the distance from anchorage to shore is almost always quite short. I looked at my GPS tracks from our 2019 summer holiday. The longest dinghy ride was at Tenedos bay in Desolation Sound. That was about 1.6 nautical miles round trip from anchorage to the landing which gives access to Unwin Lake, a popular bathing spot. Clinton Wong, on Bobo de los Bobos, reports that his 32 lb Shakespeare electric can do the trip with 4 people and a single 30 AH battery, but is slowing down a bit at the end.

Based on that, I decided on a similar sized motor, but with increased battery capacity.

After reading reviews on Amazon, I decided to buy a Newport Vessels 36 lb. thrust motor for my 9′ Achilles inflatable. It was inexpensive enough that I figured it could be replaced with a bigger one if needed.

I ordered the motor on Amazon, and it arrived at the door in two days. It seemed well made and packaged. The only assembly needed was to install the propeller with the wrench supplied.

The manual recommends a 50 AH battery, but they weigh too much for my wife to lift. I decided on two 35 AH AGM batteries which weigh 23 lb. (10 Kg.) each. Make sure you buy batteries with carry handles.

For short trips I will use one battery while on longer expeditions I will carry both. When one starts to weaken, that is the indication of “point of no return”. Swap batteries and head back. Of course we’ll have oars as a backup. I bought the batteries locally, (they are available on Amazon too) along with suitable lengths of 8 AWG red and black wires to connect the charging station.

I needed a way to connect the batteries to both the charger and the motor in an easy and safe way. I found these connectors on Amazon:

I ordered two sets. They are hermaphroditic which just means there is no male or female, and they always connect with the correct polarity. They are ideal for the purpose. I made up the cables at home, using a propane torch and rosin core solder to connect them. This was a mistake. It took a long time and although successful, next time I would crimp the terminals with this tool:

Charging the battery is a potentially tricky issue. I wasn’t able to find a charge controller specifically made to charge a smaller 12 volt battery from a larger, house battery. However, I reasoned that the controller wouldn’t “care” whether the input came from a solar battery or the ships power. So I selected an inexpensive Solar regulator. I chose the 40 Amps size as the smaller ones didn’t have terminal blocks big enough for #8 wire.

Parts list (your wire lengths may vary. I measured the distance from my main house batteries to the location where I planned to store/charge the batteries.

To be continued. In the next post I will show how it all goes together.