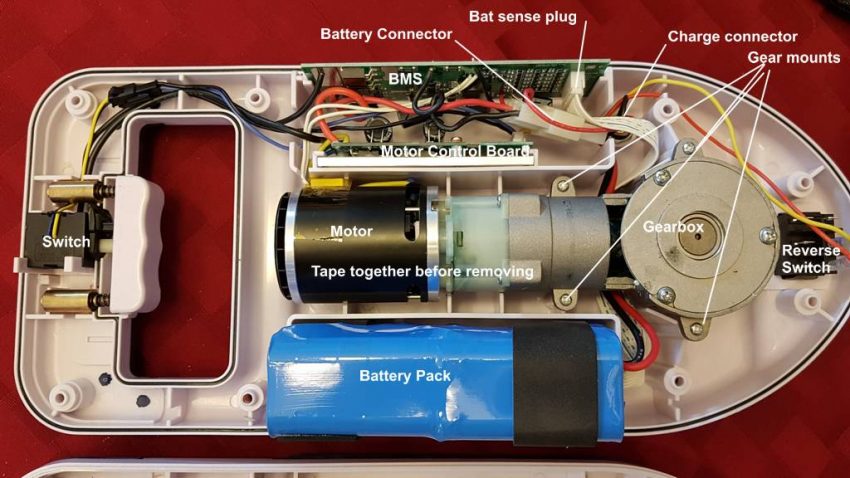 The Winchrite ABT (Advanced Brushless Technology) is a rechargeable electric winch handle made by Sailology and sold by many marine retail stores. I bought mine in March 2018. It carries a one year warranty. I was very happy with it, using it primarily to raise the mainsail and on the jib furler.

In early June, 2019, the Winchrite stopped working after successfully sheeting in the genoa on Tangleberry. When I picked it up a few minutes later it was completely dead. I plugged it into the charger,. The indicator light, which is normally red when charging or green when fully charged flashed red on and off rapidly.

I brought the unit home. Since it was off warranty I opened it up to see if I could find any obvious problem such as a broken wire or burned component. Inside it was clean and dry. I didn’t see any signs of damage. One of the machine screws which holds the covers showed signs of rust. They are not stainless steel but should be. They have small silicon rubber plugs over them but one was missing, and that was the one corroded.

Thinking I might have the Winchrite repaired by the factory, I went to Sailology’s web site and filled in their tech support form, describing the symptoms. I didn’t receive a response after 3 days so I emailed the contact emails in the About section of the web site. Martin Lynn, one of the founders, responded, but he just told me to fill out the support form. I did that a second time. This was the response:

The condition appears to be a battery thermal sensor which has failed.
Please ship the unit via UPS or USPS to the following address. Do not ship the battery-“unsafe conditions for transport may exist” Include a copy of this entire email with the shipment. We will trouble shoot the unit and send it back with our findings.
Sailology
42212 North 41st Drive, #106, Anthem, Arizona 85086
Tech Services

There was no mention of cost for Winchrite repair, so perhaps they would repair it free. However since I’m in Canada, and packing and shipping a fairly large item to Arizona is expensive, I decided to diagnose the problem to the component.

I identified each of the components inside the unit and after removing the cover, held by 8 Phillips head machine screws. There are two circuit boards. One is the BMS (Battery Management System). The other, closest to the motor, is the Motor Control Board. The components are identified in the photo below.

I first disconnected the battery pack plug and checked the battery voltage. It read 20 volts. The full charge voltage should be at least 21.6 volts.

With the charger connected, pressing the control switch caused the chime to sound and the motor to run for a moment. To me this indicated the motor and motor control systems were functional. I suspected the battery pack, which also contains the thermal switches.

To remove the battery pack from the Winchrite one must first release the motor and gearbox. There are four small Phillips screws holding them in place. The motor and gearbox are not firmly fastened together and will separate as they come out and 3 little gears will drop out. Guess how I know this! To prevent this use a piece of masking or electrical tape along the top. Then remove the four screws and set them aside. Unplug the battery plugs and lift the motor gently upward to allow the wires to slide out underneath it. Remove the battery.

The photo below shows the battery pack with the covering removed. The red and black wires are the main power connector wires. The white wires are for the thermal sensors and the battery monitoring leads. It is possible to check the individual cells from the white plug,

There are 12-18650 Lithium cells in the pack, wired with 6 pairs in parallel adding up to 21.6 volts. If you have no idea what this means take the battery pack to an expert for testing and repair if needed. I found a guy on Craigslist. I did my own test first.

This shows how to identify the pins on the battery balance connector. Disconnect the battery from both connectors. You can access the pins on the battery plug using a digital multi-meter on the 20 or 200 volt scale. From the black negative wire on the battery to B1 should read 3-4 volts. Move the probe to B2 6-8 volts), B3 (9-12 volts), B4(12-15volts), and B5(15-19) in turn. The voltage should increase with each move up the list. If 2 readings are the same or zero you have an open or shorted cell. A fully charged battery will read around 21.6 volts(or more) between the Black and Red wire.

In my case B1 read 0 volts, indicating a bad cell. I found a guy on Craigslist who specializes in rebuilding Li-Ion battery packs based on 18650 cells like these. For 120 CDN (about 90 US) he replaced all the cells with brand new 3000mah(milliamp hours) cells. The old ones were labeled 1500mah, so we doubled the battery capacity to 6000mah. Currently Winchrite advertises the battery capacity at 5.8 ah (5800mah) so perhaps they have upgraded the cells in newer units. If you are a handy type, there are plenty of Youtube videos showing how to make or rebuild battery packs. I decided to let somebody else do it.

After the new battery pack was installed the unit is now fully functional .My DIY Winchrite repair worked! I used it last weekend to raise the mainsail and furl the genoa. It worked like new. I can’t speak to battery life as I didn’t use it for very long.

The Winchrite continues to perform perfectly. It seems to hold a charge well. The battery has never run low even after a hard day of sailing. I use it on the halyards and sheets, as well as the jib furling lines. I always plug in the 12 volt charger at the end of the day, then unplug when I notice it has a full charge.

15 thoughts on “Winchrite ABT Repair”